Very pleased with the updates and the new VR footage is fantastic. Sawboss TT Member. Having tried this and Galactica I think VR on rides just doesn't work for me. It never feels like anything other than watching a video. The pacing seemed pretty off, too much exposition and the demon did a lot of wandering about, and the VR finale where the train is broken apart and you fall down into a fiery pit the graphics seemed to suddenly take quite a dip in quality. It didn't help that we had a crash at the end of the first VR section and had to sit around for a few minutes waiting.


The parts I did like were all the practical parts, the suspended carriage room looks stunning, the train coming down the tunnel followed by the shadow of the demon moving through the smoke, and of course the finale with the fake shop which completely took me by surprise and made me wish the whole ride had been done like that! I very much appreciated a demon roaring in my face. What actually happens in the "Fake Shop"? Last edited by Dom on Thu May 25, am, edited 1 time in total.

Reason: Because quoted spoilers stop spoilers from happening on actual post. You'd be better off experiencing it for yourself, honestly. But if that's not possible You walk into the shop complete with t-shirts, posters and teddy bears. I stopped to wait for the others next to this railed off area that has a ouija board projected onto the floor. We started chatting and I noticed a vent pipe behind someone shaking from side to side, had time to say 'Hey look at..

Next thing all the lights switch off and come back on to show an awesome animatronic demon in the railed off area that roars at guests. I was stood right next to it and sprayed water in my face.

Lights go off, come back on and the space is empty again. I say it's animatronic but I don't know exactly how it was done since the lighting was really well done. All in all unexpected and a great idea. One good thing I'll say about the VR that I forgot to add was the syncing of the movement of the ride vehicle and the train in the VR was really well done.

Morgan TT Member. As far as I know it's a guy in a costume, there are rumours about the head being animatronic but I haven't seen it move or do anything fancy. ThemeCrafter TT Member. The staff member from when I visited said it was half animatronic and half actor. Justin Forum Leader. If it is half and half, then it will be built within the head of the suit as I am sure the beast moves freely on the projected platform. Luce Contributor. 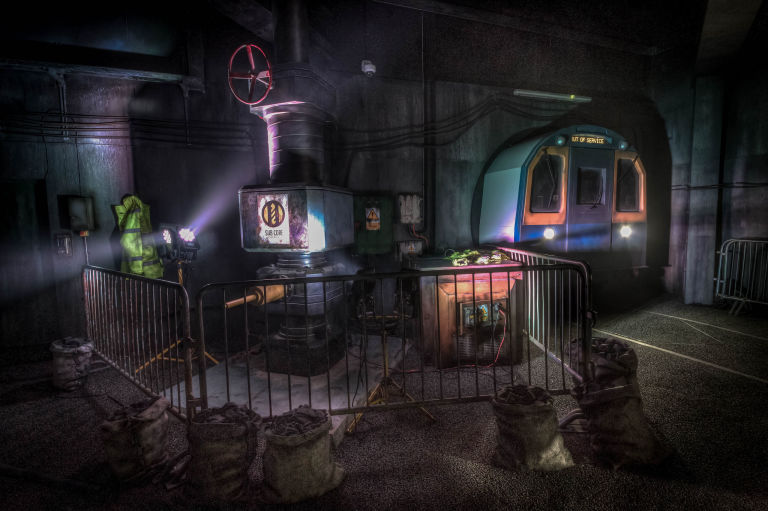 It is hard to tell I think but the demon is very lifelike and the end part is very good. It certainly isn't what I expected the first time I did version 2 of ghost train. When the experience began with the pre show, the video started early without everyone entering the room so it wasn't dark enough. After that we waited in the room before the train for a good 10 minutes. When we finally got to the train room we waited about 5 minutes for the train to arrive and load people on and off.

The ride started and I thoroughly enjoyed the VR footage and the good scares Ride hosts were on their radios talking to others, lights came on and they said "Ladies and gentlemen, this isn't part of the ride but unfortunately we have to make an emergency evacuation please wait for the doors to open and follow the ramp to the fire exit. After about a minute of waiting and recording a video which I was told off for doing the doors slightly opened and I saw a brightly lit room with lots of metal and wires, the host told us to wait and she talked to someone, after doing a bit of "ok"ing and nodding, the doors closed and we moved into the next show room of the ride and the hosts rushed us off, as if nothing happened and went back to script Being confused, I was guided to the live action segment and watched the fun commence.

I found it enjoyable, but after the ride I watched POVs and I got the train coming through the tunnel and only one actor chasing us compared to actors coming through the tunnel. Next bit of VR I thought was excellent and offered some good scares, however my headset was a little faulty with it being stuck at an angle and not being able to move occasionally.

However avoiding spoilers was a good idea as the ending did get me Well done Thorpe Overall Rise of the Demon is a great improvement to the ghost train, it's just a shame I was a bit unlucky with my ride Maybe because I rode it later on in the day so it was a bit warn out , but I would recommend checking it out! They seemed to have maintenance lights on in the whole transport section between behind the Victorian shell and the underground station meaning a lot could be seen which shouldn't be. Before I rode it for the first time I notice some light was being reflected weirdly on the mirrors making them really obvious but I just assumed they were dirty.

I then noticed that some light could be seen underneath the carriage which was from behind the shell. A train then transferred into the shell and I could see the shadow of the underground carriage moving in sideways then exiting lengthwise as it was down for technical reasons. The website was published earlier than the scheduled time which resulted in many guests being unable to get tickets. The resort soon offered a compromise, in which those who registered their name before the website closed would be entered into a raffle, where a further 12p tickets would be allocated at random.

WATCH: Derren Brown scares the bejesus out of Thorpe Park employees with ‘component’ from his ride

Load All Images. Thanks for casting me as Rosie and Emily. Anyway Rosie is an American herself incase you didn't know.

I can do an American accent for rosie and a bristish one for Emily if that's ok. Emily is british but she has a Scottish accent I'll do better with a somewhat British accent. I'm no good with Scottish. I'll try my very best with Emily.

BTW, when will the lines be sent out?